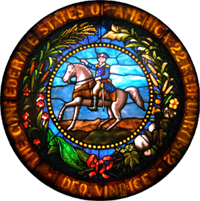 Memorial Hall was built in the most popular architectural style of its time, the Richardsonian Romanesque. Henry Hobson Richardson, a native Louisianan who lived nearby on Julia Street, was the nation’s leading architect in 1885. He had developed an architectural style that bears his name, the Richardsonian Romanesque. The adjacent Howard Library was one of the master productions of the famous architect. However, Richardson died in 1886 prior to the construction of the Howard Library and the conception of Memorial Hall. Therefore, Memorial Hall’s design was given to the local architectural firm of Sully & Toledano, and two years later its final construction would complement that of the Howard Library.

Memorial Hall was formally dedicated on January 8, 1891 and turned over to the Louisiana Historical Association by Frank Howard. The New Orleans Daily Picayune described the occasion: 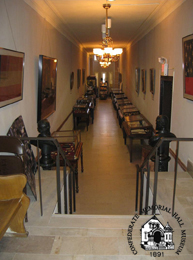 “Today the repository of the archives and relics of the Louisiana Historical Association will be formally dedicated… ‘The Howard Annex’ adjoins the Howard Library and faces Camp Street while the rear windows afford a pretty view of Lee Circle. Brown stone steps head gently upward to the entrance, a massive door constructed of southern cypress, finished in oil, and suspended with antique hinges. Within is a wonderland. There is not another building in this city like it in interior finish and contents. The hall is open and continuous, with several heavy trusses transferring [sic] the width of the building. The walls are paneled with cypress without paint and the rich yellow oil showing the beauty of the wood. Above are the beams giving an impression of strength and fixity, [sic] and above them a lengthwise ridge with glass windows on both sides, affording a plentiful flow of light.” One distinguished veteran present at the dedication stated, “Here the old soldiers will meet and, in social intercourse, tell their stories of personal adventure and fight their battles o’er again!”